Happy Saturday guys. We hope you all had a great two weeks!
I’ve personally been enjoying my summer vacation, which was wonderful.
Hopefully in the next week I’ll be able to once again join the other developers on the ToB work, but for now I’ll just be writing up a small blog on what we’ve been up to.

This time around it has been mostly progress on Raids II and points of discussion.
Some small changes on the side as well, one of them has even been integrated into the update on the 23rd.
But most of our time was spent on the Pestilent Bloat- the next boss on our Raids TO-DO list.

I am extremely proud to announce that the Pestilent Bloat is completely done.
The required time we had to spend on the Pestilent Bloat was not nearly as much as on The Maiden of Sugadinti.
This has to do with all the experience gained from completing the first boss, enabling us to work more efficiently and re-use frameworks laid for The Maiden.

The Pestilent Bloat’s mechanics are basically the same as OSRS’.
It walks around the room and will send out flies towards players that are in Bloat’s line of sight.
These flies will be able to spread even further to all Raiders near the targeted player.
After a little while, the Bloat will stop moving and be vulnerable to attacks.
In this time, the Raiders are able to lower its hitpoints.
After a period of time, the Bloat will wake up and stomp the floor- causing an earthquake and hitting any players still near it.

After the Bloat first stomps, mutilated flesh will start falling from the ceiling, damaging the player and stunning them for a few seconds.
The rate in which the flesh falls scales to how much health the Bloat has left.

At first, the Pestilent Bloat will walk in squares around the room.
The bloat will also change direction randomly throughout the fight.
When reaching a specific amount of health, the Bloat will start running instead of walking, making it harder to hide from it.

The Pestilent Bloat is seen as an undead creature, so it is weak to the Salve amulets. 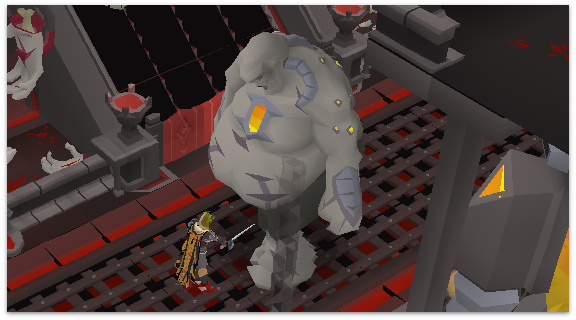 One of our goals throughout developing the Theatre of Blood was making it as close to OSRS as possible;
making it so we have a perfect copy of what players would experience on the actual game.

However, the biggest challenge- and potentially biggest time waster is upon us: the Nylocas room.
To give you an idea on what the room is: it’s basically a room where from 3 entrances Nylocas (a spider-like creature) will enter.
These Nylocas have different attack styles and will either attack the players or the pillars. The Raiders lose when all the pillars are destroyed by the Nylocas.

The problem with it is spawning the Nylocas: the Nylocas might seem to be spawning in a completely random order, but they are not.
It’s a set pattern, similar to the TzHaar Fight Cave.
In contrast to the TzHaar Fight Cave, it is not as easy to extract which monsters will spawn in what order.
It feels extremely random, and would require us to inspect hours-and-hours of footage to get it completely right.

So the question arises: do we want to exactly copy the Nylocas room- or do we want to develop an algorithm that randomly spawns the Nylocas, quite similarly to OSRS.
The second option will save us a lot of development time, and enable us to release the Theatre more quickly.

With developing this algorithm, we will take into account the combat-style ratios.
Which we will try to make extremely similar to OSRS- so the same strategies will still apply.
Choosing the option of randomly spawning them will mostly just affect the elite raiders, who want to memorize the exact patterns and act accordingly.

A poll is added to this developers blog. Be sure to cast your vote, and feel free to leave your feedback below!
We really do appreciate the input of our community. 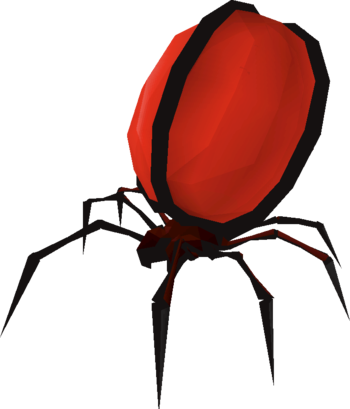 As suggested by James, the option of obtaining a red skull was added. It’s even live in the game, so feel free to try it out!
This can be done by talking to the Death npc at Edgeville, or typing ::redskull ingame.

The red skull disables the use of the protect item prayer, making sure that players in a risk fight are not able to protect any additional items.
This can be used for risk-fighting, or just for cosmetic purposes (which seems to be the more favorable reason). 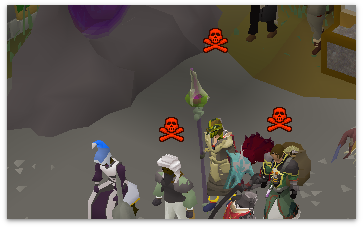 This will make it a more viable option for the lower tiered unfinished potions, and should boost the usefulness of the Npc. 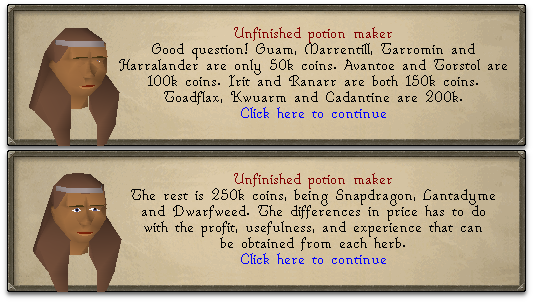 Recently we’ve been discussing the possibility of broadcasting new (larger) updates on the Discord, in our #announcements channel.
With it, possibly pinging all players in our Discord with an @everyone.

We have seen this been done by several different games before, and I personally think this would be healthy for bringing PkHonor back to the attention of older players that might have left and simply never thought of checking out PkHonor again.
Pinging these players might make a lot of them check out our server again, and might even make them enjoy our new content!

We really do want the input of the community on the matter though, because we know how allergic some people are to being pinged on Discord.
Keep in mind that specific channels can be muted though, so there is that.
Feel free to leave your personal opinion below, we look forward to hearing about the matter! 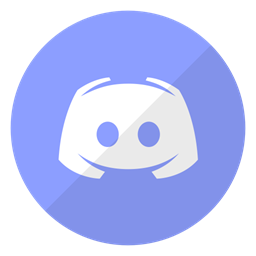 Mike recently reviewed quite a bit of code and managed to release a new update.
Hopefully all players have claimed their own milestone capes, and checked out the new donation items!

Andres has been really helpful with giving access to information about the Theatre of Blood,
seeing as he himself is able to enter the Theatre of OSRS- he has meant a lot.

As you might have noticed, we try to add in a lot of player suggested content.
We aim to be community driven, and want to involve players in the development, design-choices and content of our server.
So, if you have a new idea- post a suggestion in our ingame suggestion section.
We’d love to discuss your very own idea!

And that’s all for today! If you have any questions, feedback or suggestions, let me know below.
I’d love to discuss ideas and input from you guys! Alternatively, feel free to shoot me a PM or a message through Discord.

Thanks, and have a wonderful day!

I don't speak chess. Could you translate?

by Monys
Good work as always! Love seeing all the new updates. I think pinging everyone on disc might not be a bad idea to draw attention. +1

by James
My life is officially complete. Thoby mentioned me in his Dev Blog and made sure to mention that idiot Adam the Lion after me

by Isaac
Awesome progress! In terms of the Nylocas, I reckon our own algorithm would be best so that TOB can drop as soon as possible.

by James
Fairly neutral on the poll but I voted for OSRS style because I'm a disgusting scumbag that enjoys wasting the time of developers. Doesn't really bother me if you go with your own random version instead.

On the topic of pinging the Discord, sounds like a good idea but I think waiting until after the release of ToB would give the highest chances of retaining old players that come back.

Thoby wrote:So the question arises: do we want to exactly copy the Nylocas room- or do we want to develop an algorithm that randomly spawns the Nylocas, quite similarly to OSRS.
The second option will save us a lot of development time, and enable us to release the Theatre more quickly.

I say go with the fast method. But then again, I don't do ToB. Ask players who have experience and weight their opinion more (Except for Andres, hes a fatdog).


Thoby wrote:Recently we’ve been discussing the possibility of broadcasting new (larger) updates on the Discord, in our #announcements channel.

It should be done for all events and updates. Only ping @everyone for massive updates, like a new boss, raids, etc.