Well, happy thursday! We hope you all had a wonderful week. Thank you all for the feedback we received on last weeks development blog.
Input from the community is what makes these things work, and we really do want to know your thoughts on all the highlighted content.
So feel free to leave your feedback on the content and design choices, we’d love to hear your input!

This weeks development blog is going to (unintentionally) be cape-themed.
From skillcapes, to 2b-capes, to even more capes. We have it all.
Most of the cape-content was developed entirely by Jeremy, so he is to thank!


Theatre of Blood: The Maiden of Sugadinti (P1) 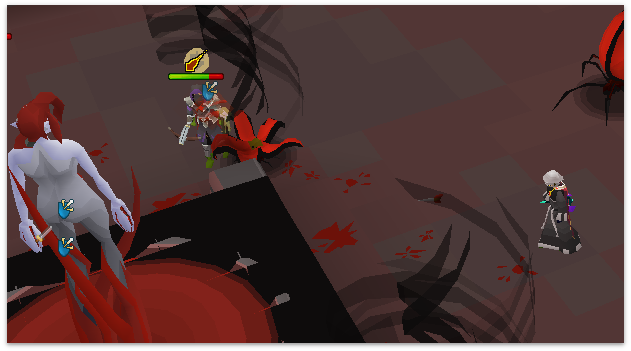 After mostly laying out the groundwork for the Theatre in the past couple of weeks, we started developing the first boss of the Theatre: The Maiden of Sugadinti.
For those wondering what exactly the boss mechanics are, here’s a quick overview:
We’re currently working on the blood attack (alongside spawning the Blood Spawns).
The rest of the mechanics are finished. Most of our time was invested in getting the healers right, making them approach the Maiden in the same manner as on OSRS.
This is important so similar strategies can be used.

We aim to finish the rest of the fight in the upcoming weeks, so we are able to move onto the Pestilent Bloat.


One of the decisions made for the Theatre of Blood is that we want to track times, something we have not done before.
This would make it possible to compete against other players, proving who has mastered the Theatre of Blood more.
We are still looking into how we could best display these times, and even if we would want to track the times for each of the boss-rooms separately.
This would give you a small chat-message, just like OSRS has it.

If we manage to lay out a good framework for this, it might be possible to use it for other instanced bosses as well- like Zulrah for example.

Okay, time to get into this week’s theme: capes, capes and capes. 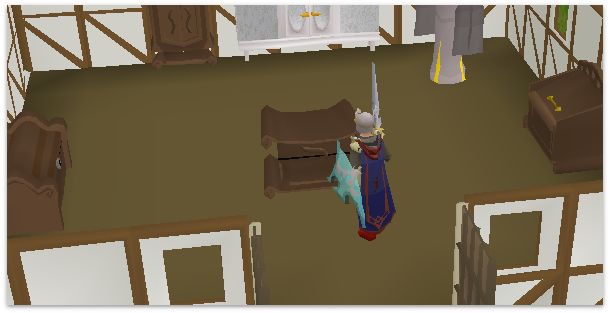 Suggested many, many times, but finally finished: the 2B experience capes! These capes were a long time coming, but are now made functional and obtainable.
The 2B experience capes would be buyable from the fancy dress boxes in your POH Costume Room (the boxes located in the center of the room).
The capes will cost 2 billion coins, and can only be worn by players who have gotten 2 billion experience in the corresponding skill.

These capes are tradeable, but are unequipable for those who do not have the required experience.
Their stats are similar to trimmed skillcapes, but provide a +8 prayer bonus, instead of +4. 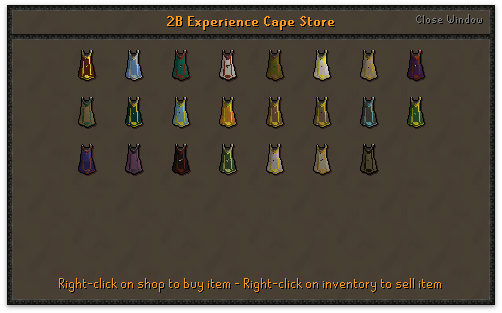 For the players who really want to show off their personal skilling-milestones, Jeremy has developed the Milestone capes.
There are 9 different available milestone capes, each displaying a higher level of mastery:

The capes can be bought from the Loom in the farm just north of Port Sarim (and in between Falador).
They can be bought with 10M + a number of balls of wool. The higher the tier, the more wool is required. 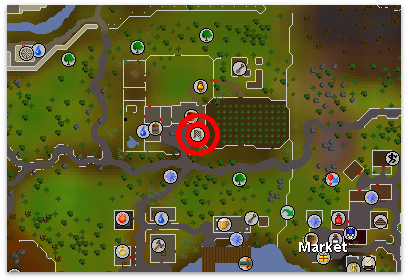 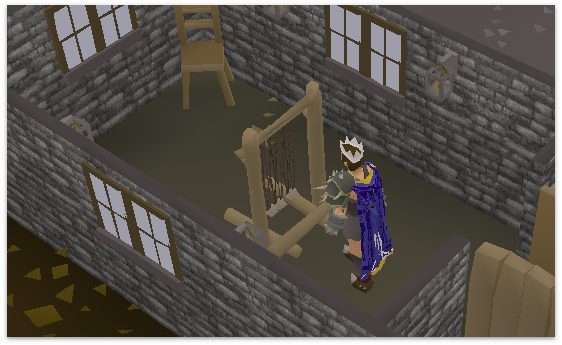 The capes are purely cosmetic and will not provide any bonus, but what better way to proudly show off you're well on your way to maxed experience?

Last but not least, skillcape perks. Suggested several times, but now completely worked out! For those wondering what skillcape perks are, they are a set of benefits provided by skill capes that OSRS has added. For example, in OSRS, the Thieving skillcape provides a 10% better chance of succeeding when pickpocketing.

However, seeing as some of the skillcape perks that OSRS presents would be useless on PkHonor, we decided to change them up a bit- so they stayed relevant to our content. This is currently the proposed list of perks (keep in mind, these are subject to change):

Attack — Free access to Cyclops area found upstairs within the Warriors' Guild.
Strength — 5% increase on drop rate of defenders at Cyclops
Defence — Act as a permanent Ring of Life. This effect can be toggled.
Ranged — Act as an Ava's accumulator.
Prayer — Act as if you are carrying a holy wrench, providing more prayer-restoration from potions.
Magic — Undecided yet, partake in the discussion right here.
Runecrafting — Operate to teleport directly to abyss.
Construction — Unlimited daily teleports to any player owned house portal (Ones in Rimmington, Yanille, Taverley, etc.) OR 5% cost reduction when buying new rooms in a POH.
Hitpoints — 2x HP restore rate (does stack with regen bracelet, doesn't stack with rapid restore prayer).
Agility — Operate to teleport to werewolf course, also acts as spottier or spotted cape (depending on if you’re donator+ or not).
Herblore — 10% decrease in price of unf potion creation.
Thieving — 100% chance of succeeding when pickpocketing (like gloves of silence, no bonus exp).
Crafting — 1.5x experience from jewelry crafting.
Fletching — When fletching bolt tips, 10% chance of getting twice as many tips.
Slayer — Slim chance of being able to persuade a slayer master to reassign your last task without cost.
Hunter — Open hunter teleports directly.
Mining — 5% chance of receiving an extra ore while mining.
Smithing — 250 extra experience per coal used.
Fishing — 2% chance of double fish.
Cooking — Impossible to burn any food.
Firemaking — Undecided yet, partake in the discussion right here.
Woodcutting — 10% increased chance of finding a clue nest.
Farming — Obtain noted herbs from farming.

With the ease of which you are able to achieve level 99 in a skill in PkHonor, we are proposing that these perks will only work once a player has reached 200 million experience in the corresponding skill.
This is to make it more of an actual achievement once you receive 200 million experience, when not going for the enchanted completionist cape.

Feel free to leave your feedback on these proposed ideas, or join the discussion on the remaining two perks on Jeremy’s poll.

We finally managed to go over to a new host! With a game like PkHonor it might not directly be as noticeable, but for a lot of players the ping will have been halved. Which means that, mostly for the EU player-base, the game will feel more responsive to clicks. A huge shoutout to Rapsey and Mike for completely moving everything over and getting things back up running with such a minimal downtime. We haven’t experienced any problems with the DDoS-attacks since moving, which is amazing news.

Mike managed to get some of the newest projectile-graphics working in our client, which means that we are now able to take advantage of the newest projectiles. For those who noticed, we used some alternative graphics for the Lizardman Shaman for example- which can now be fixed. Also, this really helps with further developing the Theatre of Blood, which uses a lot of projectiles and different other graphics.

Also, Mike has finished reviewing the code for the Catacombs, and is now testing the content on any oversights.
If all is right, and not too many bugs were found, we are aiming to release it as soon as possible. Be sure to look forward to that!


And that’s all for today! If you have any questions, feedback or suggestions, let me know below.
I’d love to discuss ideas and input from you guys! Alternatively, feel free to shoot me a PM or a message through Discord.

Thanks, and have a wonderful day!

by Da old gamer
Does max cape also get some perks?

by Troll n roll
Very nice blog, thanks for the updates!

by Ross
Any reason you're working on ToB before CoX?

Ross wrote:Any reason you're working on ToB before CoX?

Yes sir, there is.

Thoby wrote:So, after quite a bit of discussion we have decided to start with developing Raids II first (the Theatre of Blood).
We are aware of the fact that the community is partially split on us starting with the Theatre instead of Raids I (Chambers of Xeric).
However, due to the required development time and skill-level for CoX, we decided to release the ToB first.
It would take us way longer to develop all of CoX’s features, while the ToB is more accessible for us newly-promoted developers.
Alongside that, some groundwork is required from Mike to provide the randomly generated CoX dungeons- which would only take more time.

Hopefully with the experience gained from the ToB we will be able to more efficiently tackle CoX.
While players would be enjoying the challenging Theatre of Blood, we will be working hard on creating the Chambers of Xeric.

We're still not too sure on this. Seeing as the OSRS skillcape also provides all perks, I think we might want to add this too. The 200m requirement for each of the perks will still apply though.


Troll n roll wrote:Very nice blog, thanks for the updates!

Thank you very much!

by James
Nice one Thoby and Jeremy. You're doing great work x

by Jon
Hype for capes!

by Jonas
Happy to see things like this! Keep up the good work! Love it!