Theatre of Blood released on the testserver - bughunter contest

All of PkHonor's news will be posted here.
Post Reply
84 posts

Theatre of Blood released on the testserver - bughunter contest

After several months, it's finally here: our very own Theatre of Blood!

Because of how big the update is, we have decided to first release it on our test server (a server completely separate from our live server) so players can look for bugs we bring the update to our production server. The test server currently runs on a player database from several months ago, so my apologies for it being rather outdated.

TL;DR:
To participate, simply download our Theatre of Blood test client and see if everything works as expected. If you find any bugs (that are otherwise not a bug on the live server), please report it as a reply on this topic. Make sure to include your game username in one of your bug reports so I know where to add the credits at the end of the contest.


To know how the Theatre of Blood works, I recommend the OSRS wiki on the subject (or its strategy guide). We have done our best to make our ToB work in exactly the same way as on OSRS, with two minor exceptions:
Firstly, you will always keep all your items when losing or dying in the Theatre, but you will need to pay a penalty of 10M coins to play again after each time you fail it.
Secondly, Hardcore Ironman players will keep their status if they die in the Theatre, so it is considered a safe minigame. I know that the outcome of the poll on the subject was 70% in favor of losing the status vs 30% keeping it, but we want to prevent hardcores from losing their status due to a bug or a combat mechanic that works different in PkHonor than in OSRS. If we feel confident that our ToB mechanics all work 100% like OSRS and are completely bug-free, we might decide to make the minigame dangerous later on (and we'll be sure to prompt hardcores with the appropriate message when we do), but not right now in any case.

A few things to test in ToB is food/potion sharing (and the inability of irons to see food/pots dropped by others) along with the dropping of Dawnbringer in the Verzik room. For your convenience, you will be able to start the Theatre in any of the six rooms on the test server.

The complexity of several bosses forced us to rework some major parts of our NPC-related code, so there's a very real chance of one or more of our current in-game bosses (and other monsters) being broken as a result. A few possible ways in which they might be broken is them not following or attacking properly, their hits not registering, not using correct attack styles, or - forTzTok-Jad - not being able to switch prayer in time etc.

I'd like to ask the community if they can test not only the Theatre of Blood itself, but also all of our other bosses to see if none of them broke.
A list of possible bosses to check are as follows (but feel free to test other NPC's as well):
Some useful commands on the testserver:
Spoiler: show
::item <itemid> <amount> (spawn items with id itemid). Check our items list to get the ID's of items, or use the ::item command with (part of) an item name as argument to find ID's. For example '::item cannon' will list all items with their ID that have 'cannon' in the name
Note that the items from OSRS that we don't have available on PkHonor yet (such as the twisted bow) don't work properly yet. So no need to report bugs related to items that can only be obtained by spawning.
::adminset (spawn really strong items)
::master (get level 99 in all skills)
::noob (set all skills to 1)
::tele <x> <y> (teleport to x y)
::xplus <x> (move x squares east)
::xmin <x> (move x squares west)
::yplus <y> (move y squares north)
::ymin <y> (move y squares south)
::spec (restore spec bar)
::food (spawn rocktails)
::barrage (spawn thousands of barrage runes)
::pkpoints (give yourself 500 pkpoints)
::slaypoints (give yourself 500 slayer points)
::ancient (switch to the ancient spellbook)
::lunar (switch to the lunar spellbook)
::normal (switch to the regular spellbook)
::prayer (switch between regular prayerbook & ancient curses)
::pray (regain full prayer points)
::bank (bank anywhere)
::xrich (spawn max coin stack)
::strset (spawn some melee items)
::rangeset (spawn some ranger items)
::ach (to complete or reset all achievements)
::q1, ::q2 and ::q3 (to complete or reset the quests Pest Invasion, The Last Journey and Correcting History)

The contest will be ongoing until we feel confident that most of the (important) bugs have been reported and fixed.
[EDIT] The contest is over and the winners declared: viewtopic.php?f=10&t=78189&p=686683#p686683

Current bughunter report:
Spoiler: show
Pvm porn - 15 points
- Players can now keep inviting others even if they already invited them before, to prevent bugs with the invite system - 2 points
(fix to be released yet)- You can now leave your party by right-clicking the ToB entrance and clicking "Leave-party" - 2 points
- One player will now properly receive a red path to follow when they are chosen by Sotetseg - 3 points
- When doing a Sotetseg or Xarpus room again, the room is now cleared of poison, tiles or tornado of your previous run - 3 points
- Sotetseg can now be attacked again if the chosen player dies, the tornado will also instantly disappear if this happens - 3 points
- When logging out and back in while inside the Theatre of Blood, you should now be teleported just outside the room, to the same location where you are teleported when you die - 2 points

Troll n roll - 14 points
- (needs client update yet) Gray parts on the minimap have been removed - 1 point
- (not yet fixed) Verzik does not attack the team for a short time after she kills a team member - 3 points
- (not yet fixed) The clickbox of barriers is too big, especially at Pestilent Bloat - 2 points
- Dawnbringer is no longer lost upon entering Verzik's room - 3 points
- Fixed the Zaros killcount being misaligned - 1 point
(not yet fixed, could not reproduce) - Scythe of Vitur shows the wrong max hit against a max hit dummy - 2 points
- Logging out or disconnecting while in the ToB treasure room will no longer result in a penalty - 2 points

Thierryu1 - 13 points
- The HP of ToB monsters and the pillars in the Nylocas room now scale with the size of the party - 3 points
(yet to fix) - The pathing around big NPC's has been improved - 3 points
- Players will no longer take damage when walking on the tiles near Sotetseg after killing the boss - 3 points
- (not yet fixed, no idea how it could even happen to begin with) items show up twice when dropping them inside a cage at Verzik - 1 point
- You can hit Verzik with Dawnbringer from behind pillars - 3 points

Isaac - 10 points
- It should no longer be possible to retaliate against unattackable monsters, such as the summoned souls at Cerberus - 3 points
- Fixed the game saying you need death runes to charge the Sanguinesti staff (visual bug) - 1 point
- Fixed poison pools not disappearing on failing the Xarpus stage - 3 points
- Fixed comp capes or other items that should normally go to refund box being lost when dropped in the ToB - 3 points

can't wear full ancestral. if you have 1 piece equipped, and try to equip another, it removes the previous piece.

edit: ancestral is also equipping to the weapon slot.
Top

As long as the test server isn't as outdated as my wardrobe, things are fine.
Top

If you invite someone and wait some time they cant accept the invite anymore but you can't reinvite them because it says already invited. Also leaving a party is very confusing, should be an option on the door

charged scythe of vitur has no stats when equipped.
Top

pathing is absolutely terrible and you get flung all over the room.
Top

when scythe of vitur is charged, it remains in its uncharged state and you can't use it.
Top

If you stand here in the Maiden room: 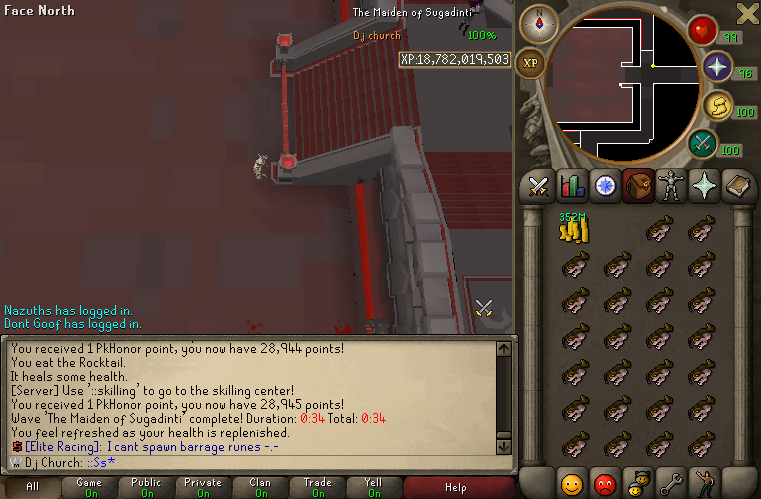 And then click to walk through the barrier you'll clip into this wall and get stuck: 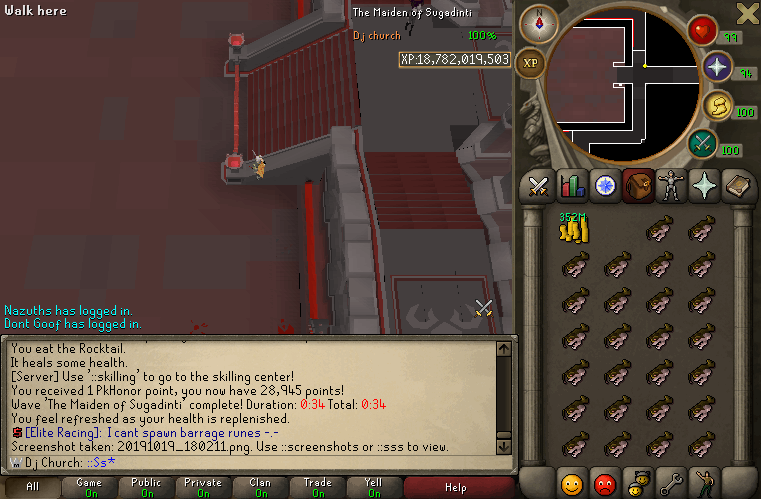 Directmalice wrote: ↑
Sat Oct 19, 2019 11:35 pm
can't wear full ancestral. if you have 1 piece equipped, and try to equip another, it removes the previous piece.

edit: ancestral is also equipping to the weapon slot.

I'm unable to reproduce this issue. If I have an uncharged scythe in my inventory and I use the "Charge-at" option at a vyre well, my scythe gets changed into a charged version and I can use it just fine. It also has the proper stats.

Please be aware that there are two scythes in the game for some reason, both with a different ID. Make sure you have the one with ID 22325, the other isn't used (and not obtainable unless by spawning).

Can you be a more specific regarding this? What room were you in and what was happening exactly? A video or clip might also be helpful.
Top

Another weird bug - in Soteseg, no one had a path to follow when teleported. Also, when returning to Soteseg and Xarpus after dying to that first Soteseg bug, walking on the floor in the Soteseg room (as soon as we walked in) or where the poison was in the Xarpus room in our previous run would damage and kill us. I have a video of the Soteseg floor killing us as soon as we walked in, the run after the no-path bug, I can't post it right now but will in a bit. Switching party leaders fixed it but before that we couldn't actually get to the boss, I think it had to do with the party leader dying while teleported by Soteseg. After switching party leaders we still had no path when teleported by Soteseg but could at least enter there and Xarpus.

Also currently the only way into Verzik is to kill Xarpus, otherwise the guy says you need to kill Xarpus, though that's probably restricted to the room choosing on the test server