All of PkHonor's news will be posted here.
Locked
159 posts

Todays updates bring some much anticipated improvements to the pathfinding of our NPC's, along with the addition of several item sets (yay for more bank space!) and a whole lot of bugfixes and QoL improvements.

Bank placeholders have been added! They work exactly the same as in OSRS - all you need to do is right-click an item in your bank and choose the last option, 'placeholder' in order to withdraw all items but leave a placeholder where the item used to be. You can left-click it to remove it. 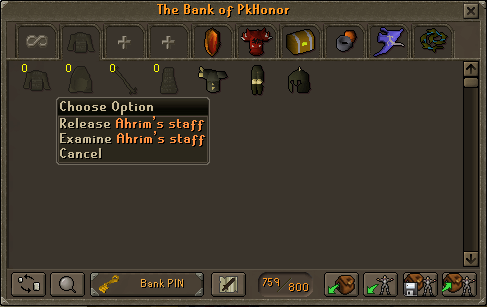 Our prayer books have also been altered: 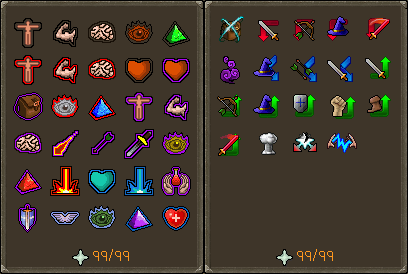 With the above changes, our regular prayer book now looks exactly the same as in OSRS with every prayer having the same placement. The only difference is the Rapid Renewal prayer at the end.


Other minor changes and bugfixes:
Top 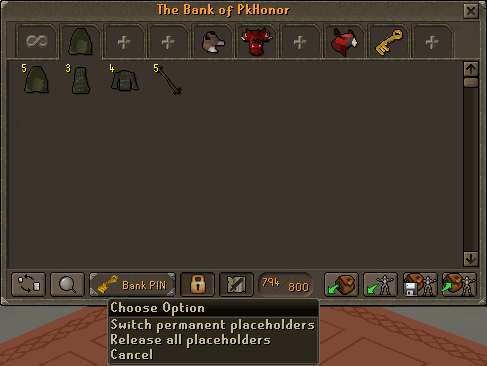 The looting bag has been released!
It's been a long time waiting for this particular feature to be added, but it's finally here. And it works exactly the same as in OSRS:

The refund box has received a few improvements: 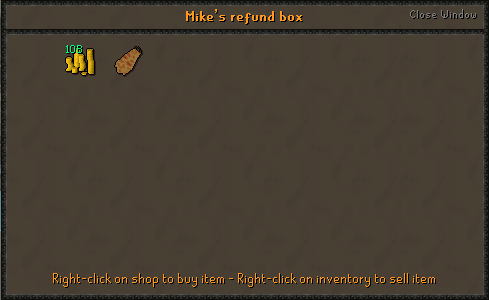 Players can now also download a portable client, which you can simply download and extract in any place you want, without requiring a Java installation and without having any files in your home directory. This client is the successor of the old zip client, retaining all of its functionality while adding some improvements.

The contents look like this, with a seperate launcher for Windows, MacOS and Linux: 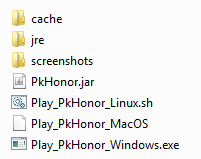 Note that double-clicking PkHonor.jar will work just as well, but only if you have Java installed on your PC.

The only downside is its size. The ZIP file is 140MB and when unzipped it will take 316MB space on your computer or whatever media you put it on (such as a USB drive). This is because, aside from the cache, the client has 3 Java Runtime Environments packed - one for Windows, one for MacOS and one for Linux.

MacOS users might get the error message shown below:

In order to get around this, simply use command+click (or control+click) and click 'Open' in order to start the client: 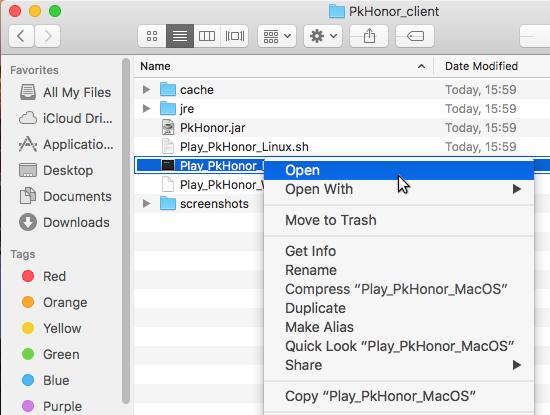 You will then get a dialog where you can choose to open the client. After you have done this once the client will start normally each time. 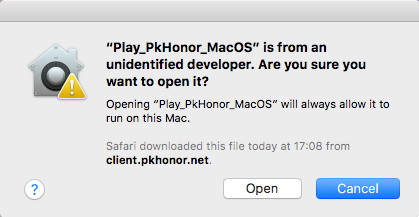 Hardcore Ironman Mode has been released! 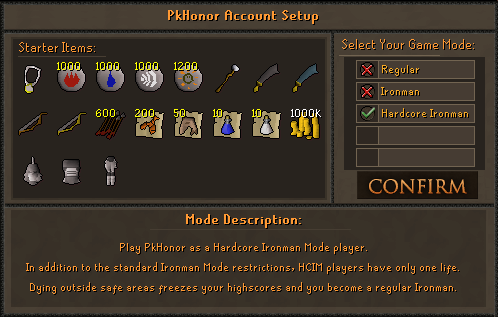 When dying at a safe activity, you will not lose your status. These include: Duel Arena, Pest Control, Castle Wars, Clan Wars (except in wilderness mode), Fight Cave, Fight Pits and Zombie minigame.
In any other situation, dying will result in losing your status. So be careful at in a Player-Owned House dungeon in PvM mode or Clan Wars with wilderness mode enabled. Dying at Zulrah or while having a salve (e) amulet equipped will not save your hardcore status either when you die, even though your items are protected in both of these situations.


I am also glad to announce that after more than 3 years of randomly disappearing pets, I have finally figured out the piece of code that is responsible for the disappearances. Today's update contains a fix that should stop them from vanishing into nothing.
Basically, if you closed your client the very second that you log in, your pet would be gone (I managed to test and confirm this). There may also have been other causes, possibly when logging out during teleportation, but I cannot confirm those since I could not reproduce them. Either way, no matter the cause, it should no longer be an issue now!


In other news:
Top

First and foremost, no more instant switching! For a long time, players have complained about being able to instantly equip or unequip gear in between game ticks. In OSRS and every single other RSPS, when you click multiple items at once to equip them, there will be a very brief delay (the time until the next game tick) after which you will equip all the items at once. In PkHonor, you would always immediately equip every item that you click. Although it seemed the better choice (to reduce any lag or clicking delays players might experience), this created some bizarre and unintended side effects.

A few months ago I had attempted to fix this, but was unsuccessful in doing so. It was only yesterday that I found where exactly the origin of the problem was.
That being said, instant switching is now a thing of the past and should no longer be an issue.


Secondly, throughout the past few years, there had been very rare occurrences of players getting a couple of minutes of account progress rolled back, accidentally receiving a duplicated item in their inventory or bank or an item being lost without a trace.
A couple of days ago, a player contacted us stating he had found a way to reproduce this issue. He gave us the exact instructions to do so, and although it still took us several days to discover the cause, we have finally managed to do so!
Of course, we can never guarantee a 100% dupe-free server. Every now and then (once a year on average), an update introduces a new one, but so far we have always managed to minimize their effects and fix them within a very short time.

The dupe that is fixed today is the one dupe (and rollback issue) that had been evading us for years. Especially since it happened on such a rare occasion and nobody managed to reliably reproduce it, nor did anyone - until a few days ago - know how to do it. A huge thank you to this player (any others that assisted him) in finding and reporting it.
Let it be an example to all other players that abusing a bug results in an immediate account ban and confiscation of items - but reporting a dupe results in a hefty reward instead.

The dupe was caused by being able to log in at the exact time that your account is being logged out. There used to be a very brief delay (just a couple of milliseconds) in which you are able to log in right before your account gets saved from the logout. By doing so, the server would load an account that is up to 2 minutes outdated and give the appearance of a rolled back account.

At last a long awaited change to Glacors - as of now, they will no longer be found in the wilderness!

Their new location is upstairs in the blurite mine at Mudskipper point. You can get there by walking to Mudskipper point, taking the ladder down, going through the Wyvern cave entrance (where Wyverns will be added in a future update) and going up the stairs.

Or you can take the easy way and use 'Monsters teleport' - 'More' and select 'Glacors'.
Glacors will no longer move through objects, but they will no longer use melee attacks either - only ranged and magic. 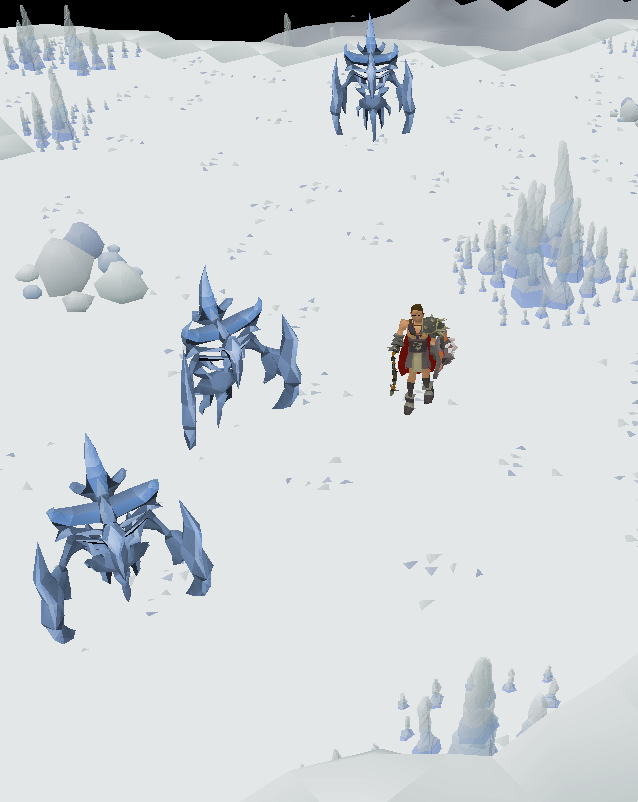 The rune pouch has been released! 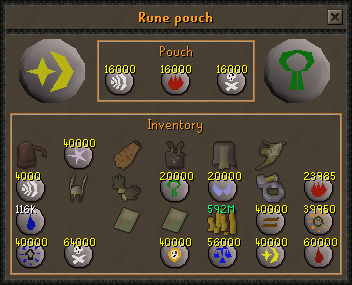 Similar to OSRS, the pouch is used as follows: Today's update also fixes a bug where selling items to a store would take more items than intended, without giving extra coins.
Top
Locked
159 posts