All of PkHonor's news will be posted here.
Locked
156 posts

At last, we have our very own Wilderness achievement diary as replacement for the 500 killcount requirement for the Completionist cape!


An overview of all wilderness achievement tasks:

PvM/skilling tasks (double of each task amount for Ironman Mode players)
PvP tasks (only on Bounty Hunter targets)
And the rewards:

Not a whole lot of new features today, but a very important update nonetheless. For over a year, there have been rare occurrences of players getting their account rolled back a couple of minutes (losing XP or items they obtained within those few minutes). A couple of days ago, we finally figured out the cause of this small rollback issue and today we are glad to release a fix for it! The technical explanation of how, why and when the rollback issues occurred is far too complex, what matters is that it's finally a thing of the past!


In other news:
Top

Karambwan fishing, cooking & eating has been added. To fish karambwans, go to the south of Brimhaven and talk to Tiadeche. Raw karambwanji are obtained at the fishing spot south-east of Tai Bwo Wannai village or in Tiadeche's shop for 10K coins each.
Cooked karambwans heal 18 HP each and just like OSRS can be consumed after food or potions with no delay. After eating a cooked karabwan, you must wait 1.8 seconds before you can drink a potion or eat another piece of food. 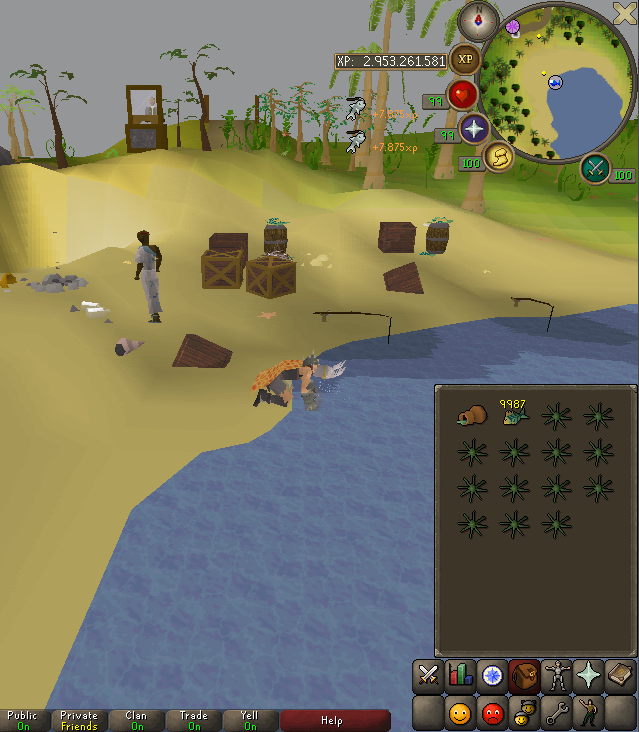 Today's updates summed up in one picture: 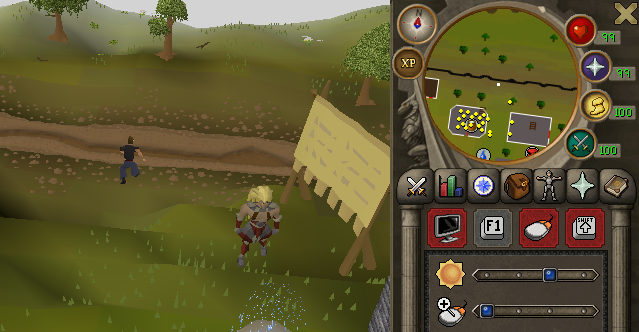 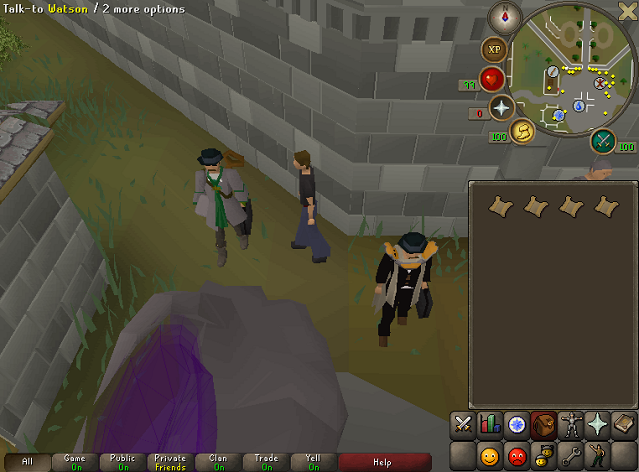 There is also a small chance of receiving a master clue scroll whenever you complete an easy, medium, hard or elite trail (the higher the difficulty, the higher the chance).
The rewards for a master clue scroll include all elite clue scroll rewards (including magic stone) but with slightly higher drop rates. There are also a couple of new items in master reward caskets that cannot be found anywhere else: We are however planning to add more unique rewards to the master caskets in future updates. 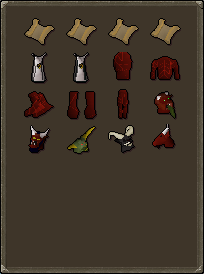 Skilling treasure trails
Whenever you are fishing, woodcutting or mining, you can now randomly obtain a clue bottle, nest or geode. They range from easy to elite. The difficulty is decided at random and the type of fish, tree or rock you mine has no influence on whether you get an easy or an elite clue. The level requirement and your fishing/woodcutting/mining level do however influence how often you will get a clue. You can only have 1 of each tier of each type (so you can have up to 12 skilling clues at any given time).
In order to get an actual clue scroll from your skilling clue, simply open the bottle, nest or geode. When you do, you also have a chance to obtain one of these 3 unique items: Note that treasure trails that come from a skilling clue will never include combat or have any kind of level requirements, unless you exchange them for a master clue scroll. 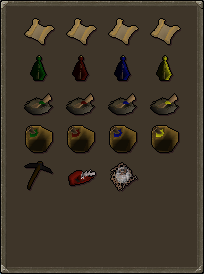 More clue locations - there used to be 45, now there are 90
Other treasure trail changes & additions
And a couple of other updates
Top

Effigies have been added!

Just like clue scrolls, starved ancient effigies are dropped by all monsters with a combat level of 70 or higher. They have similar droprates to clue scrolls, but a high level monster has a much higher chance at dropping one than a low level monster. Wilderness NPC's also have much higher effigy droprates than NPC's outside the wilderness and having Bounty Hunter enabled increases your odds quite a bit as well. You can have a maximum of 5 effigies on your account in total and they cannot be traded.

Once you investigate the effigy 4 times, it will evolve into a dragonkin lamp which allows you to pick any skill you want, including hunter and construction. It has no level requirement and will give you ((level * level * level) - (2 * level * level) + (100 * level)) / 3 XP, rounded to the nearest thousand (unless you get receive less than 2,000 XP, in which case it's rounded to the nearest hundred - for level 1 you receive 50 XP).
For example, using a dragonkin lamp to advance a skill that's at level 99 will grant you 320,000 XP. Using it for a skill at level 70 will grant 113,000 XP etc..

Two important things to note: brawling gloves give 30% bonus XP when you investigate an effigy and there are ancient effigies that have construction, hunter and slayer included!

Demonic and Tortured Gorillas have been added!

You can find these gorillas by walking north-west of the Grand Tree (north of the gnome agility training), going through the opening in the fence and continuing north-east until you get to the cave at the end of the peninsula. Alternatively, king Narnode Shareen (found inside the Grand Tree) sells royal seed pods for 1 billion coins which will teleport you close to the cave entrance. Royal seed pods have unlimited uses and can be used up to level 30 wilderness.

When entering the cave, you will receive a warning that you're about to enter a dangerous area. This warning can be toggled at the doomsayer and players who already have the Ape Atoll warning disabled will also have this warning disabled. Once inside the cave, you will find several aggressive tortured gorillas which use melee, ranged and magic attacks and will switch their combat style after missing 4 attacks in a row.

Slightly east and then north along the stairs, you can find demonic gorillas which also use all 3 types of combat and switch style after missing 3 attacks in a row. They have a special attack that launches a boulder at your location which will hit you for 1/3rd of your current hitpoints if you don't move out of the way in time (similar to glacors). They also have protection prayers that they will switch once they have taken 50 damage. 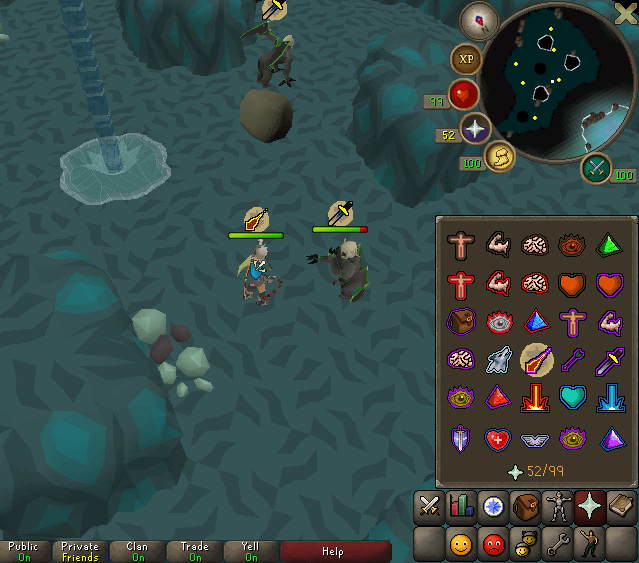 Demonic and tortured gorillas drop zenyte shards, which can be fused with a cut onyx at the wall of flames underneath Ape Atoll (use the trapdoor at the east end of the Ape Atoll temple). You then receive an uncut zenyte, which can be used to craft zenyte jewelry. Since there is no "Lvl-7 Enchant" spell in our spellbook yet, you need to right-click the unenchanted jewelry and choose "Enchant" in order to enchant them. This requires a magic level of 93 and uses up 20 soul runes, 20 blood runes and 1 cosmic rune. You can only do this while using the standard (modern) spellbook. Alternatively, you can also use the "Lvl-6 Enchant" spell on the jewelry, again requiring a magic level of 93 and using up 20 soul runes, 20 blood runes and 1 cosmic rune.
This jewelry requires a hitpoints level of 75 to wear and consists of the following items: The gorillas also drop the parts of the light and heavy ballista, two-handed crossbows that use javelins as ammunition. The light ballista requires a fetching level of 47 to create and yields 3000 fletching XP for the whole process, the heavy ballista requires a fletching level of 72 and yields 4500 fletching XP. The light ballista requires a ranged level of 65 to wield, the heavy ballista requires a ranged level of 75. Both have the same special attack that uses 65% special attack energy and increases damage and accuracy for the next attack by 25%.

Javelin shafts can be fletched by using a knife on regular logs, while javelin heads can be made through the smithing skill (except dragon javelins, which are dropped by the gorillas). Simply combine the shafts with the heads to create javelins. They break on use so they cannot be picked up and they can be poisoned with weapon poison 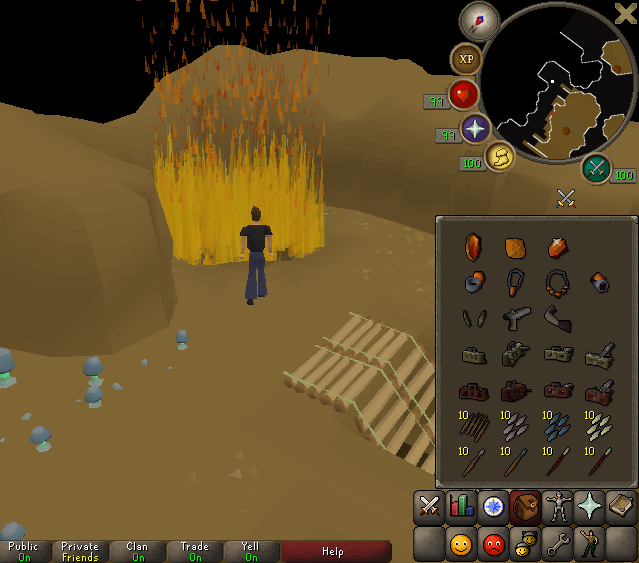 Bracelet crafting has been added!
I managed to rework the crafting interface as such that players can now craft any kind of bracelet. The mould can be found in the crafting guild and among the tools in your PoH workshop.
Bracelets are equipped in the hand slot (where gloves and vambraces go) and, with a few minor exceptions, work exactly the same as they do in OSRS. Inoculation bracelet (ruby) and Abyssal bracelet (diamond) have not yet been added as they have no use in PkHonor at the moment.
Bracelets you can now craft and enchant (on top of the tormented bracelet): 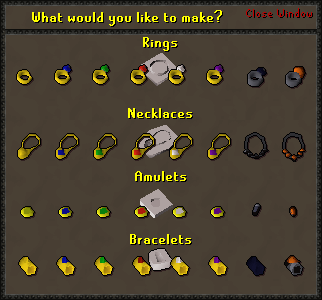