All of PkHonor's news will be posted here.
Locked
158 posts

In today's update, we bring you some of Andres his work from the past weeks: Vet'ion 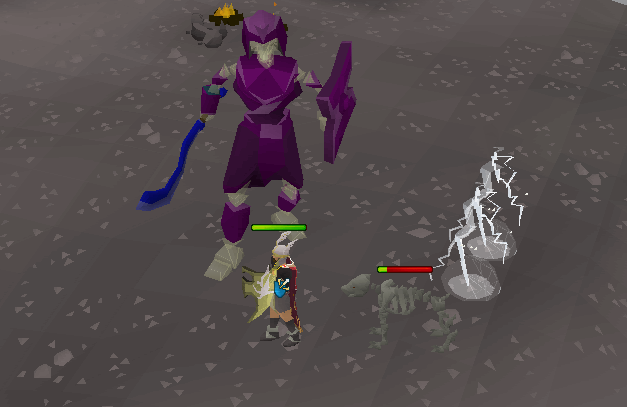 Like all of our other recently added bosses, it works almost exactly like in OSRS. It uses a basic melee attack, an AoE melee attack that can hit anyone in a 11x11 square and a magic attack that shoots 3 projectiles, one of which is aimed towards the spot where the player is standing and 2 others further away.
Once it reaches half HP, it will spawn 2 skeleton hellhounds, which need to be killed before you can finish off Vet'ion. Once killed, it will respawn in its reborn form and spawn 2 greater skeleton hellhounds when it reaches half HP.

Like all other wilderness bosses, it has a lot of valuable drops. On average, it grants more and better drops than Callisto, Venenatis or the King Black Dragon each kill, but it is much slower to kill because of its hellhounds and reborn form.

The Staff of The Dead has been released! 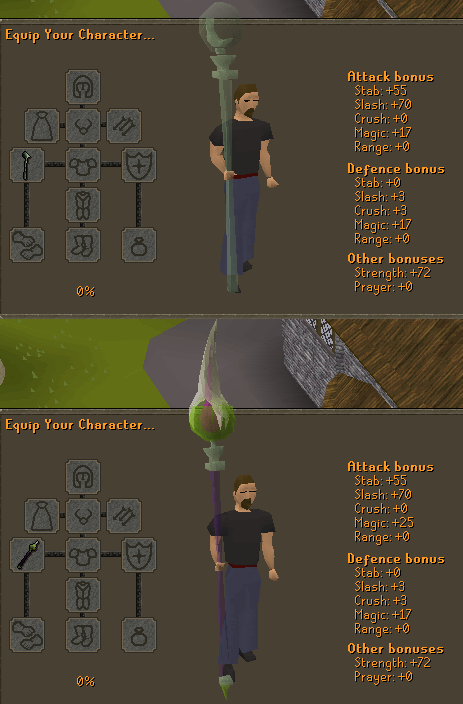 A small Quality of Life improvement I came up with today for my own use, but which I'm sure our Honor players will know to appreciate: you can now use the ::item command (or its shorthand ::i) to get the ID of an item by passing (part of) an item name instead of an item ID. You will then be shown the ID's of all items in the game that contain the characters you typed. This is case insensitive. For example, to get a list of all dragon dart ID's, you can type "::i dragon dart" or "::i gon dart" or "::i agon dar" etc.. and each time you'll be shown the full list of all dragon dart ID's.

We have now added the Doomsayer, who roams just North of the Edgeville bank. 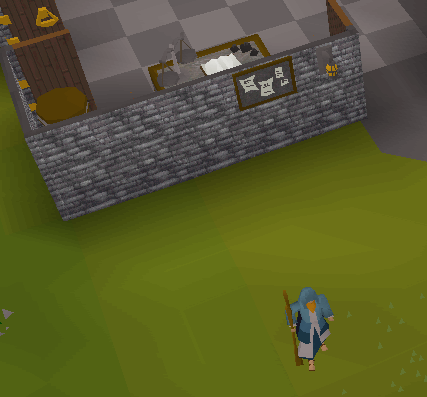 The Doomsayer allows you to see your personal punishment history (both punishments and warnings) and to toggle warning messages when you attempt to perform any of these 11 actions:
Since a few days ago, we have added CoinPayments, a payment service which accepts Bitcoin, Litecoin, Bitcoin Cash, Dash, Dogecoin and Ethereum on our donation page. These donations in cryptocurrency should hopefully allow some players to donate who were previously unable to do so.

As of now, players who use DPI scaling in Windows 8.1 or Windows 10 (the slider that makes all icons & text bigger on your PC) will no longer have issues with a tiny or blurry client!
Not a server update this time - in order to make use of this update, simply restart your client! (only for the Windows installer client)

It's taken us several days of research and testing, but we have finally managed to find a solution. We fixed it by creating a new Windows client that comes packaged with its very own Java Runtime Environment. Not only does this mean that the client is now scaled according to your screen resolution (and no longer looks tiny on 4K screens), but you no longer need to have Java installed on your computer to play our game! Not to mention that the installer is only 18MB in size.

A quick comparison of how our client looked before and after (old client on the left, new client on the right - click for full-size versions): 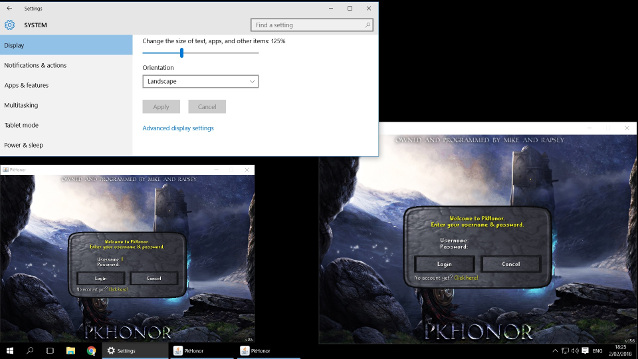 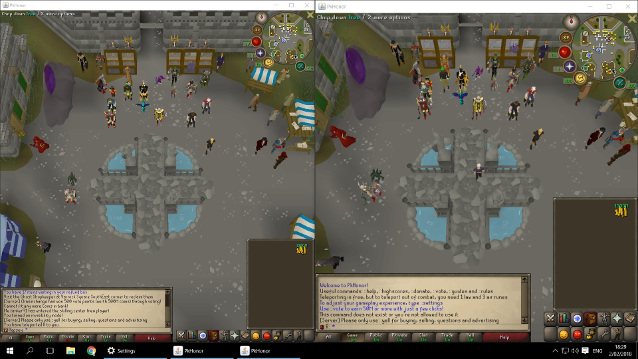 To my knowledge, we are now the only RSPS that is compatible with Java 9 (most RSPS have a bugged right-click menu for Java 9 users) while also working properly on 4K screens! By doing this, we have made our client completely future-proof!

Please note that this fix mostly applies to Windows 8.1 and Windows 10 users. Anyone with an older Windows version will probably not notice any difference in their client. It won't be blurry, but it will not scale according to your preferences either - if you use Windows 7 with a 4K screen there's not much we can do, but that's because Windows 7 can't really handle 4K screens properly anyway.
Players using Windows XP (or older) cannot use the packaged Java Runtime Environment, so they do still need to have Java installed in order to run our client.
Top

Brought to you by Andres, three new wilderness bosses have been added at once - Scorpia, the Crazy Archaeologist and the Chaos Fanatic! For their locations, see the map below:
Spoiler: show 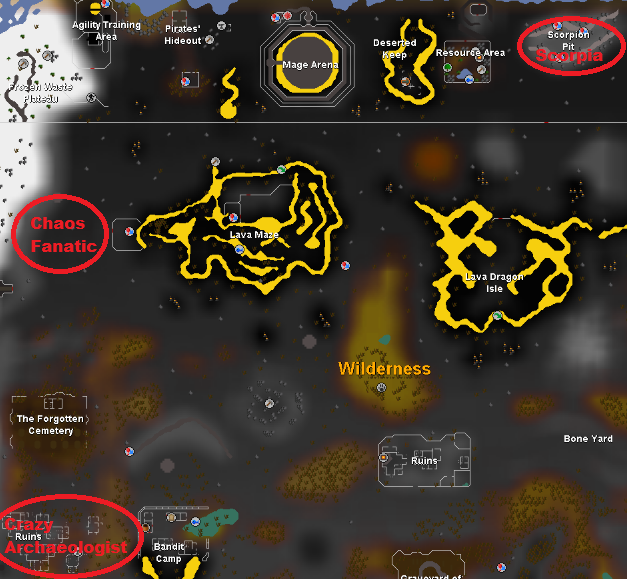 Ironman Mode players have the ability to spawn any of these bosses at a summoner in the wilderness.
Each of these 3 bosses drop a shard of the Odium and Malediction wards. These shards can be combined at the Volcanic Forge, found in the most north-eastern part of the wilderness, near the Chaos Elemental just past the Rogue's Castle. For their stats, please refer to the Runescape wikia pages (Odium ward, Malediction ward). Both the shards and the wards can be freely traded.
The wards both require a defence level of 60 to wield and although they are by no means the strongest shields in the game, they do not degrade and offer a much cheaper alternative to chaotic or spirit shields. 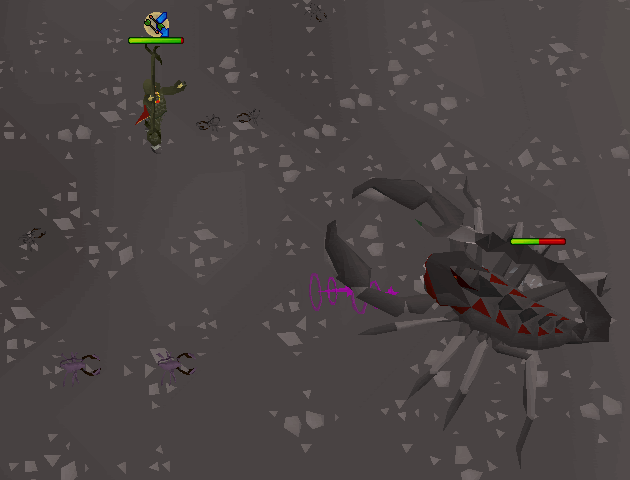 Residing under the Scorpion pit in the deep wilderness, it can deal a lot of damage with poison and melee attacks. However, unlike most other large NPC's, it can be frozen in place. Its offspring deal ranged damage, apply poison and drain your prayer points. At half health, 2 Guardians will spawn for 15 seconds which heal her. Scorpia has a weakness to magic attacks.
Other than the odium/malediction shard 3, she drops Scorpia's offspring, a boss pet that can be combined with an ex-ex-parrot for a Lucky Scorpia's offspring. She also drops many valuable items, similar to other wilderness bosses, making her one of the most profitable NPC's in the game. 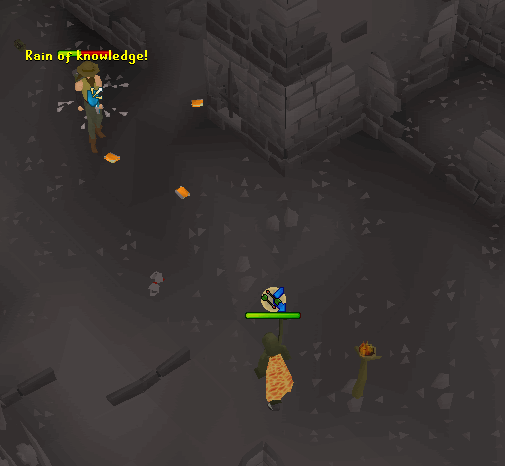 You'll find this miniboss in the ruins south of the Forgotten Cemetery. Aside from odium/madlediction shard 2, he also drops the Fedora - a tradeable cosmetic hat without bonuses - and the Long Bone, a tradeable bone that grants 50,000 construction XP when buried. Burying the bone requires a construction level of 99. The XP stacks with Brawling Gloves. 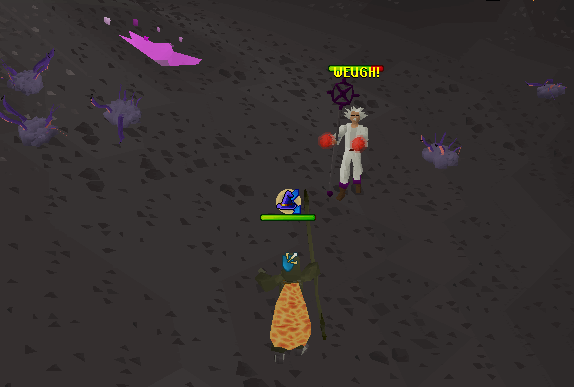 
In further news
As of now, whenever you lose a Fire Cape, Max Cape or Completionist Cape on death in PvP, it now always immediately goes to your refund box and will cost a certain amount of coins to reclaim. The full reclaim cost is also dropped as coins for the killer. If you lose one of these capes in PvM, you now have 5 minutes to go back where you died reobtain it before it is put in your refund box for a price. Refund prices are as follows:
All Morph Ring NPC's have had their attack bonus rebalanced - due to a major overhaul of our combat interfaces over a year ago, the attack bonuses of several NPC's (including Death) were unintentionally drastically decreased so they became almost useless. Today's update aims to remedy that: The main reason I chose to increase Death's crush attack bonus, rather than using the Scythe combat interface, is because the Scythe combat interface has neither a special attack bar nor autocast options. Creating a completely custom Scythe combat interface for Death is also incredibly hard and time-consuming.


Other improvements and bugfixes:
Top

The following changes to the wilderness and Bounty Hunter have been released:
Several items in the Bounty Hunter store have also had a price adjustment and now cost (in Bounty Hunter Points):
Spoiler: show

4 PvM Completionist Cape requirements have also been added today. These only affect players who have not yet obtained a Comp Cape. Due to technical limitations, those who already have one will still be able to wear it even if they don't meet these 4 requirements:
Other improvements & bugfixes:
Top