We're looking to improve our testing process and reduce bugfixes following updates. OSRS seems to do well with this with their 'Beta Worlds', and so when possible, we're going to be looking to do betas going forward.


This update includes fewer gameplay changes and content additions, and is more focused around QoL and bugfixes. That said, there have been some major changes made. The changelog is as follows:
Spoiler: show
QoL Changes:

Click here to download the test client
Note: Unlike previous bughunters/beta servers, we have copied everyone's accounts over to the test server a few days ago (your progression on the test server has no effect on your production account).
All accounts on test servers have elevated permissions. Feel free to spawn and use items like the 'perfect' necklace and blade of destruction and go explore the game

If you have suggestions or bug reports related to the changes, please post them on this thread.
If you don't have a forums account, you can do ::discord in-game and do @Raj and @Nazuths to report a glitch.


We appreciate everyone who helps with this. It will massively help streamline the development and release processes.
Thank you all for your help!

So I've found out there were some BoD times which are literally impossible to beat, some people feel old PB times are unbeatable due to the machine gun BP being removed, so I'm wondering what solution we'd like to see. Please vote on the poll, thanks.

In today's update: the Kill Count Book will now track boss and minigame completion times! You can view the new section using a button which you'll find at the bottom of your Kill Count book! 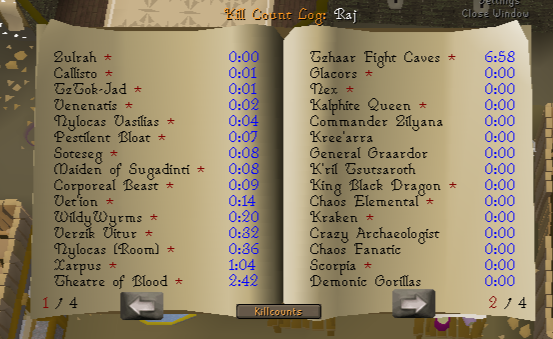 For a time to register, there's a requirement that the player completing the kill does 95% or more of the damage to the NPC. There are exceptions for CoX, ToB, and the Nightmare. In those places, the entire team will have a shared time registered. This may be reworked, but for now it seems like the best way to ensure the highscores are as fair and competitive as possible.


You can toggle time notifications for individual bosses in the same way as in the killcount section; by clicking the entry for the boss and choosing whether you'd like to show or hide notifications. You can also sort by time completed or alphabetically using the settings button at the top right of the book.


What about my old completion times?
To add your personal best for the Chambers of Xeric, simply open up the scoreboard near the CoX entry and it will be added to your kill count book. For other bosses and minigames which were previously timed, there will be no preloaded times. 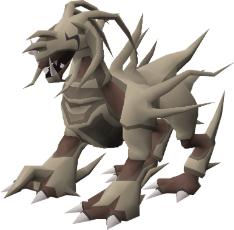 Welcome back to the latest community bossing event. This week, we will lunging our spears into the heart of the Corporeal Beast. The Corporeal Beast can be reached by entering the cave at the Premium Island teleport or by using the ::event command.

This event features 3 major perks: If you are unfamiliar with community events or how they work, please refer to our Zamorak GWD event announcement post.

The top 10 regular accounts who have dealt the most damage will earn an additional reward.

The top 10 ironman accounts who have dealt the most damage will earn an additional reward.

With the recent release of the Tombs of Amascut (also known as Raids 3) in OSRS, we are aiming to add this new piece of content into PkHonor very soon. Thankfully, the raid setup looks a lot more like Theatre of Blood than Chambers of Xeric (no randomly generated room layouts, no storage systems or skilling rooms, ...), which means the amount of development time needed to add the new raid will be much closer to how long it took us to add Theatre of Blood than it took us to add the Chambers of Xeric. So that's good news already!

However, there are a few important points of discussion, which we need to settle on before we get started on the actual development. I have been reading up on the OSRS wiki and watching video guides in order to educate myself on the mechanics of this minigame. Based on this information, I have distilled three questions that I believe need to be answered, each of which will have an impact on development time: For those who don't know what invocations are: this system allows players to customise several aspects of the raids, choosing to enable a large number of raid-wide and/or boss-specific mechanics that make the raid more challenging, while increasing the rewards you get at the end. This system allows a much wider range of players to access this content, anywhere from casual players looking for less of a challenge (no invocations), to people who want to challenge themselves by enabling as many invocations as possible to make the raid a huge challenge. It's important to balance the rewards accordingly, as there has been some frustration from OSRS players who believe that the added rewards aren't worth the difficulty or absolute pain that some of the invocations bring, so we may have to make some of our own choices to do even better than OSRS in this regard.

Invocations shouldn't be too much hassle to add, but this is something we can easily add after the initial release (similar to how we added challenge mode to the Chambers of Xeric a short while after the initial release). Adding our own custom quest as requirement to enter will obviously take some time to add, but if we choose not to add this, we can't really add one later either.
As for puzzle rooms, this will also take some time to implement (some rooms will take longer than others), but if we choose to add them later, we will have to rebalance the rewards and reset the fastest completion times when the puzzle rooms are added (if we choose to add fastest completion times on release).

If you have any input or suggestions about this new content, please let us know. The more input, the better. Once there is some consensus among our community on how to approach this new major piece of content, we can get started with the actual implementation.
Powered by phpBB® Forum Software © phpBB Limited
Black Style by Arty